The Western Cape’s Garden Route is rightly regarded as one of South Africa’s ultimate destinations, with a breathtaking array of choices for family fun or individual pursuits.

From the beaches of Plettenberg, to the holiday feel of scenic Knysna, the natural wonders of Wilderness and so much more, one could frolic for weeks on end with surprises at every turn.

But there are also some amongst us who go to the Garden Route for a single reason, largely oblivious to the rest of the items on the Western Cape menu.

To some of us, that part of the world is actually known as the Golfing Route, dotted as it is with such fantastically playable courses, rich in history and charm.

From established stalwarts like George Country Club and Plettenberg Bay’s offering, onto the coast-hugging Instagram vistas of Pinnacle Point, not to mention the elevated Pezula and Simola, the region is simply overflowing with options to suit the avid golfer.

The dazzling jewel in this considerable golfing crown, however, is Fancourt. Simply put, it is Africa’s ultimate golfing destination, and a place that many call home. Fancourt, 7 km from George Airport, lies on 613 hectares of pristine countryside sheltered by the Outeniqua Mountains.

It’s more than a golf estate. It is a community, a large family of people brought together by the appreciation of the finest things in life. 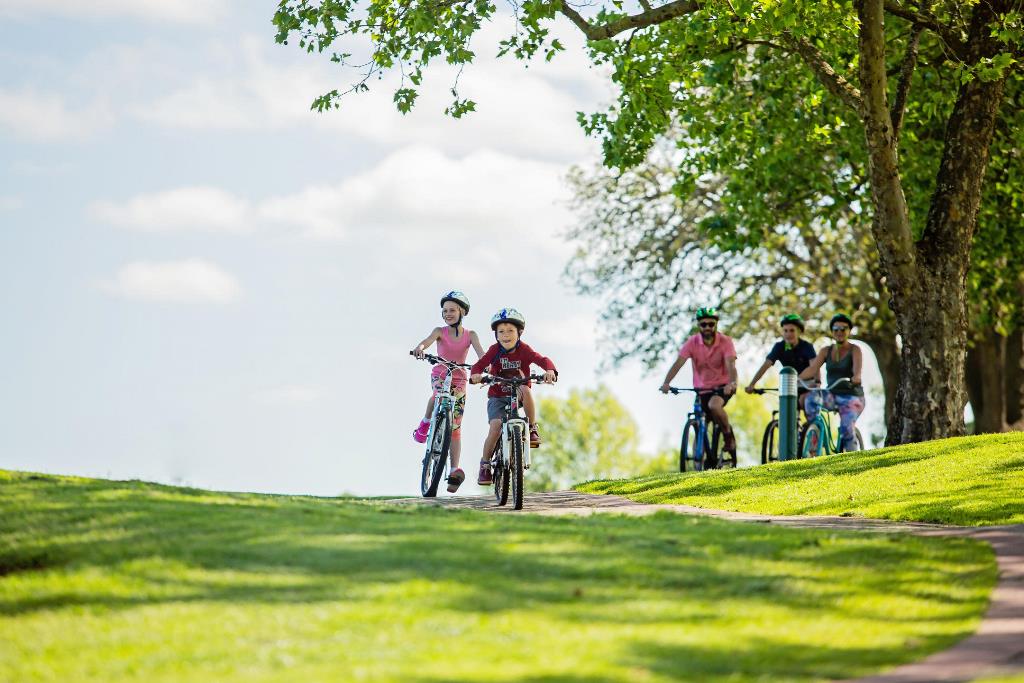 Fancourt is an exceedingly special place, even amidst the natural abundance that is the Garden Route. As soon as you drive into the estate, there is a sense of occasion. The clubhouse that serves the Outeniqua and Montagu courses is cavernous, with plenty of corners to sit and natter as a family or a golfing fourball. 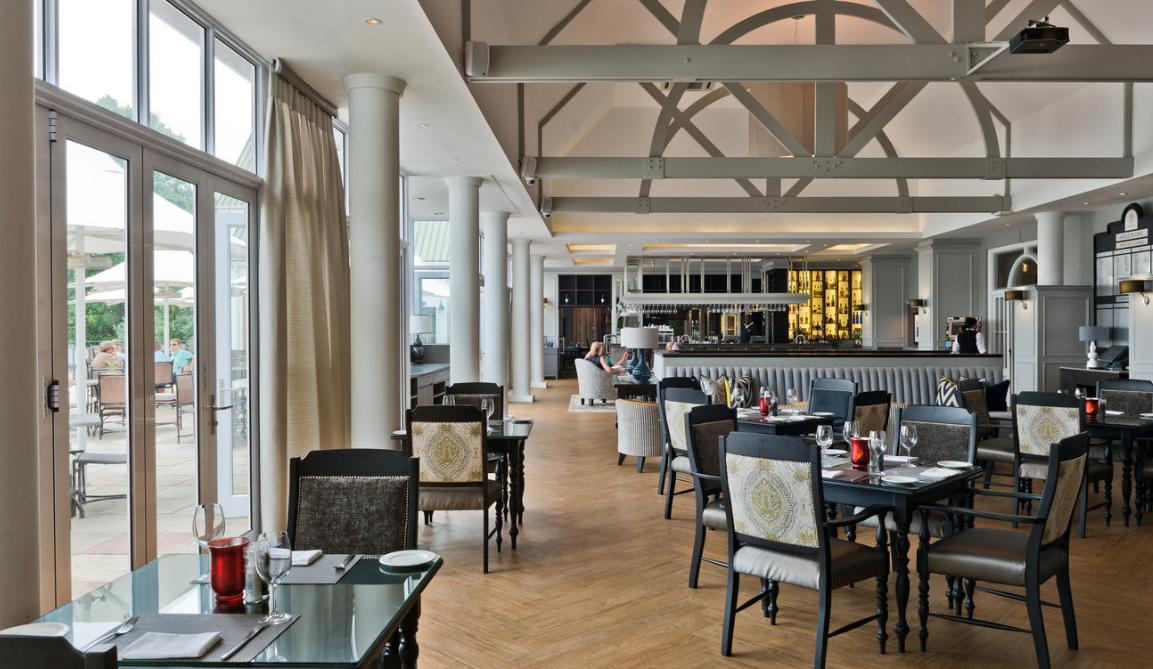 There are three dining options, besides the club lounge, to suit the casual and the immaculately turned-out patrons who want to make an occasion of things.

The clubhouse is a hub of activity, with the soundtrack of happy children at ease in their surroundings.

The accommodation choices are also varied, with 115 rooms and suites dotted around the Montagu course, as well as houses that can be rented out by families and golf groups. 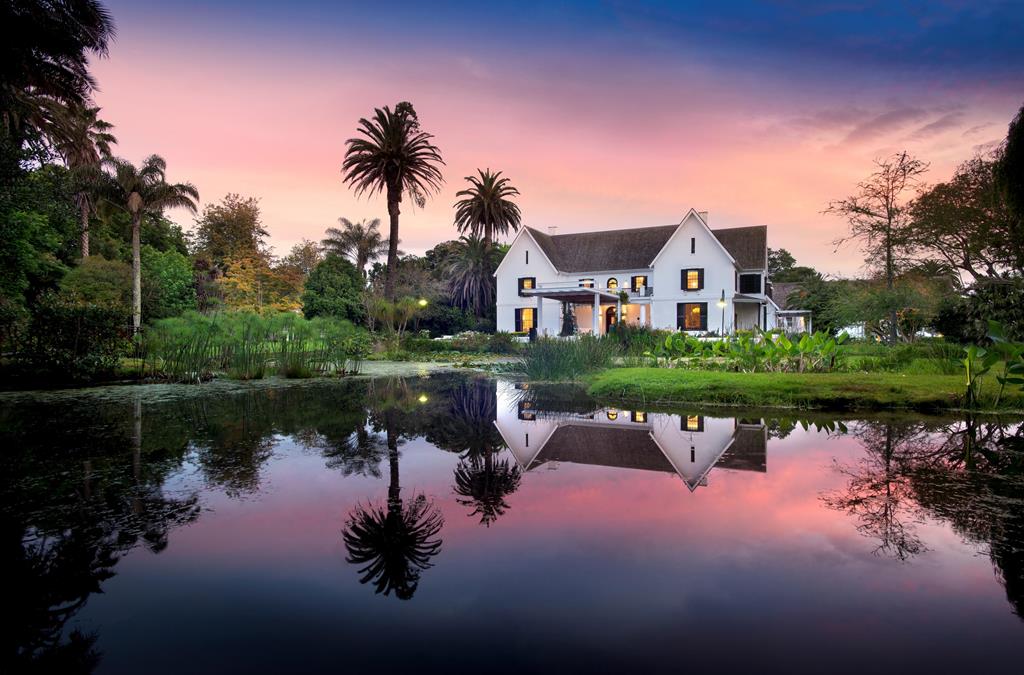 For the well-heeled, the butler-serviced Manor House is a truly majestic experience. The Cotswold mansion-style abode is the former house of 1850s British engineer Henry Fancourt White, and is a bespoke offering where nothing is impossible. The overall service and attention to detail elevates Fancourt to its world class billing as a hotel, never mind the golfing opportunities. 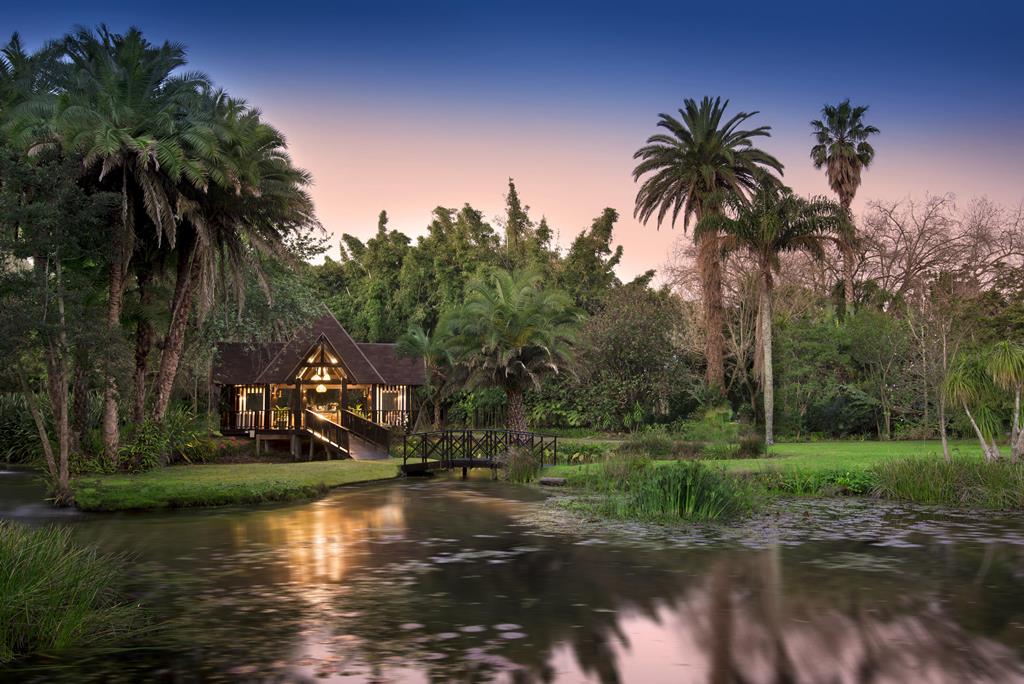 This consistency has been recognised over the years, with a host of hospitality awards, including a recent acknowledgment by Golf Digest as one of the Best Golf Resorts in Africa and Asia.

For the pampering of weary limbs, the hotel spa is easily accessible by the clubhouse, and there are hiking trails for those guests who want a break from all the golf on offer – or if they just want to really earn the therapeutic call that follows in the well-appointed spa facilities.

All the amenities of a modern, family-friendly estate are at hand, and the staff at all levels are particularly friendly. There is a pride in being a Fancourt employee, part of a rich heritage of understated luxury.

Three of the Best 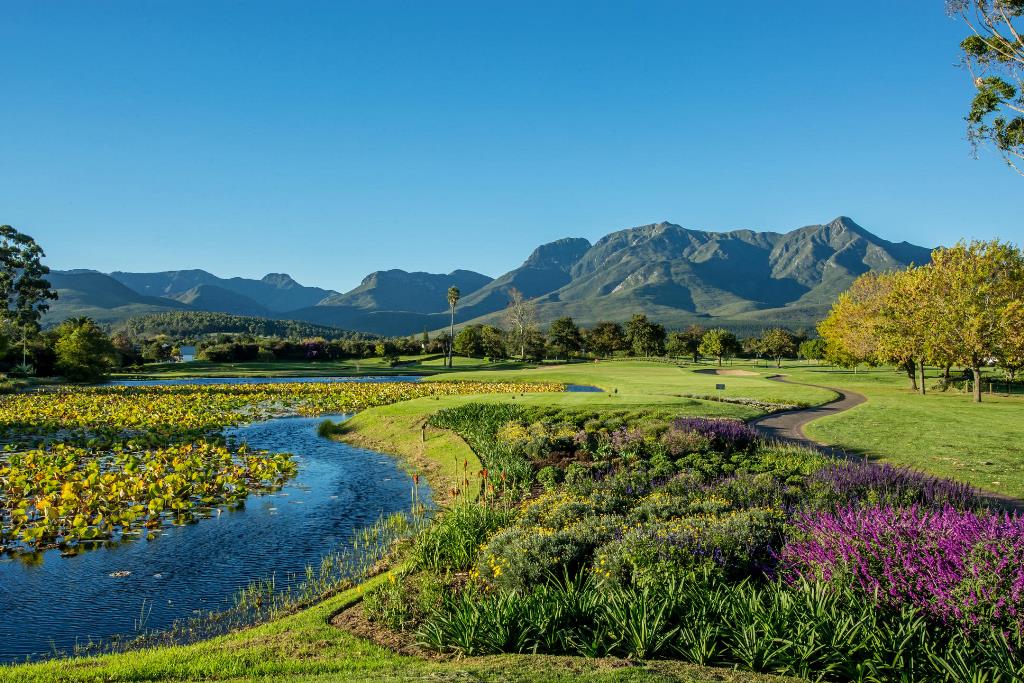 There are three championship courses at Fancourt, each requiring your full attention to get the better of them. Outeniqua is an excellent parkland track, shooting out to the captivating mountains it gets its name from. Though some dare to call it the easiest of the three golf courses on the estate, Outeniqua bares its teeth with subtle elevations, a deceptive wind whipping off the mountain, and massive putting surfaces that place a premium on accuracy. 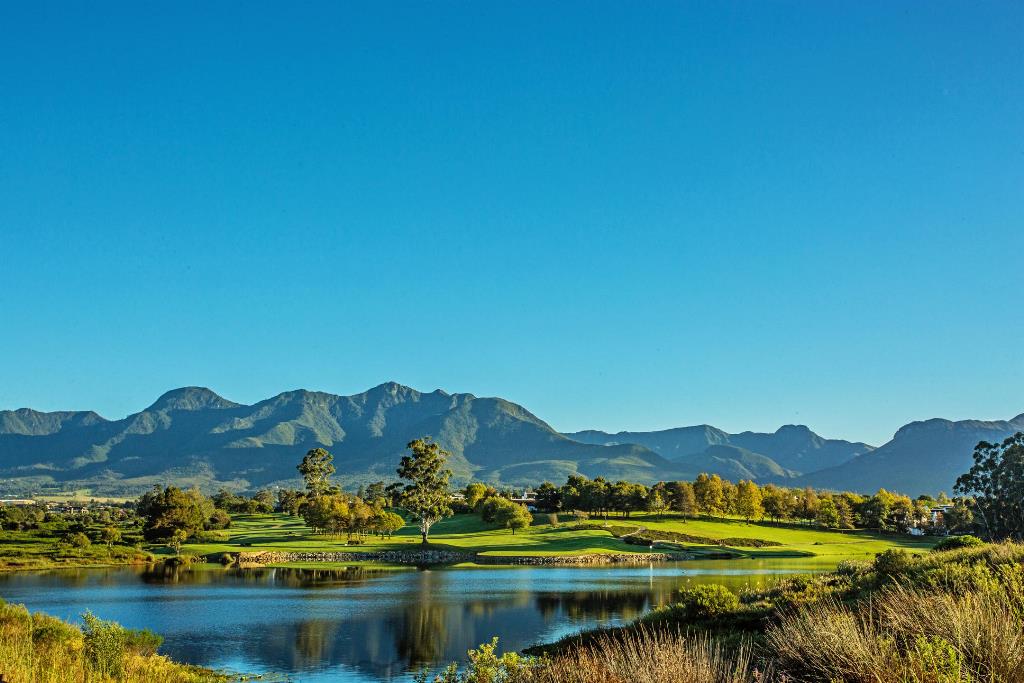 The Montagu course commands respect from anyone who sets foot upon it. There is more than a hint of Augusta National to its parkland design. The grass even looks Masters blazer green, and the examination of one’s golfing prowess is just as sincere. Montagu is long and uncompromising, with the sweeping fairways often requiring a medium or long-iron approach into greens that are on the speedy side.

You simply have to bring your A game to a track that even pro golfers consider to be one of the toughest tests in South Africa. The 16th hole was designed with Augusta’s 12th hole in mind, with water, carefully placed bunkers and what looks a small target welcoming the golfer to his final stretch of holes.

If you are a guest at the Fancourt Hotel, you may find yourself lucky enough to be offered one of the limited slots to play at The Links, South Africa’s top-ranked course. 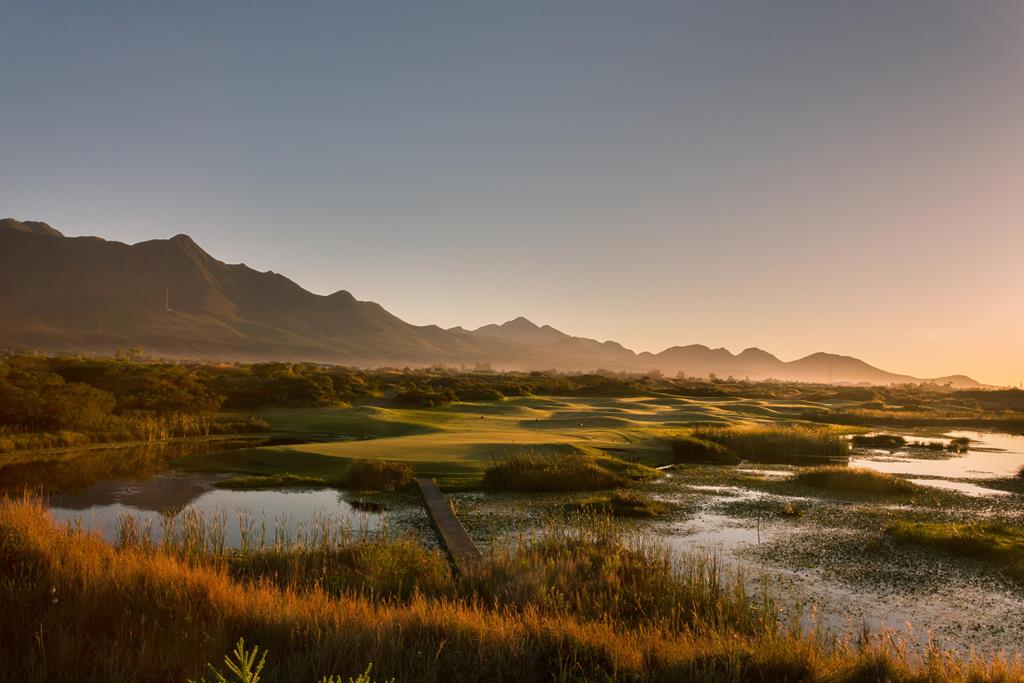 Host to an unforgettable President’s Cup duel that ended in a famous tie between Jack Nicklaus’ American team and Gary Player’s International side, spearheaded by Tiger Woods and Ernie Els respectively, The Links at Fancourt are an absolute bucket-list item for the avid golfer. 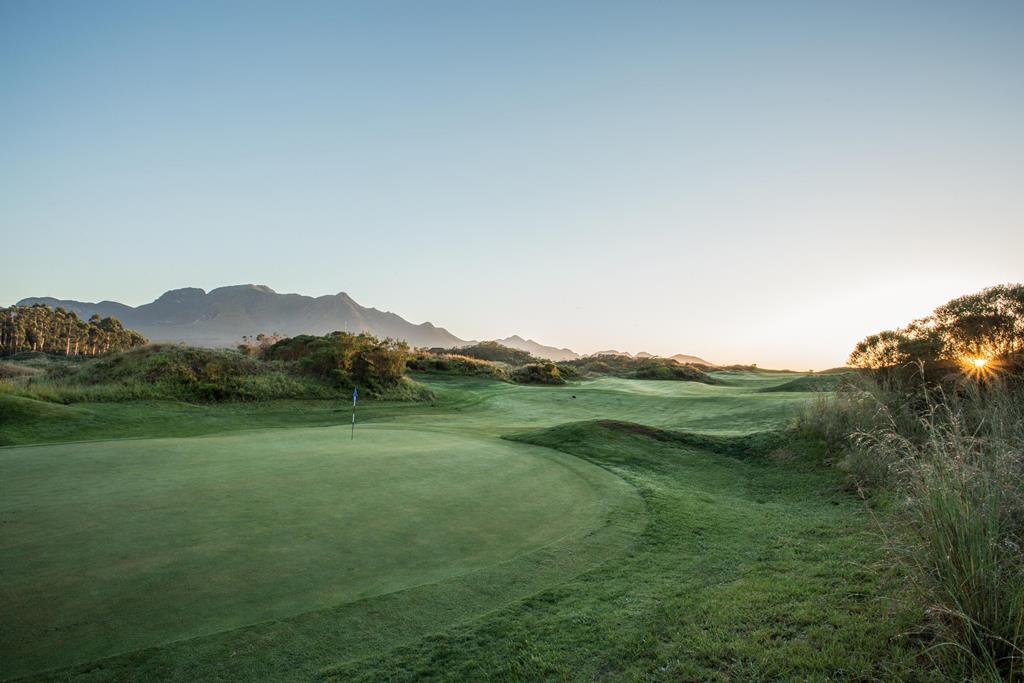 Words fail to adequately describe just how awe-inspiring The Links is at first glance. Everything is different, and the Gary Player designed experience stays long in the mind.

The smallest detail is emphasised and you feel like a golfing professional for but a day, because of the attention and the silence that surrounds you during your round.

There are limited tee times for Hotel guests because The Links is, well, special. It operates on its own schedule, where time stops and nature talks. The golf itself is mind-blowing, requiring the most exacting shot-making in your arsenal. A local caddie is worth his weight in gold at Fancourt, but even more so at The Links. The design fools the uninitiated eye, with subtle changes in elevation. You also never seem to have a flat lie on the fairways, so concentration is a premium.

From the club tees, the course may appear on the short side, but the defence is based heavily on the slopes on the greens, and some devilish pin positions.

In this modern world of constant noise and news, The Links is a temporary pause button. It is an escape, from Fancourt even, and a step into golfing nirvana. Sitting at the simple, stone-walled halfway house in the middle of nowhere, you are reminded of just how special the place is.

The brutal path back to the clubhouse includes a bunker savagely named as The Coffin, as it can snuff out any momentum. Fittingly, the closing par-five hole climbs up to the clubhouse at the crest of a hill. From the back tees, it is an almighty carry over the gorge, before a final tap-in, and a welcoming drink from veteran Links staff such as Sipho Kalawe, who is eager to hear your tales of woe and glory from the hallowed fairways.

As experiences go, the entire Fancourt estate is unforgettable. The golf is challenging, demanding even. The hospitality is luxurious and, more than even that, the attentive staff ensure that you can’t wait to come back for more.