I have long been intrigued by the Okavango Delta. As a sprog in the 70’s a school chum regaled me with fabulous tales. In the 90’s my late friend Steven Morris was a chef at a camp- and spent a month alone on an island on a personal quest.  Would I find some of what Steven did, I wondered as we flew due North from Johannesburg  to Maun in Northern Botswana?

The flying was a breeze, leaving ‘Maritzburg in KwaZulu-Natal, South Africa aboard an Airlink flight, changing without having to recheck baggage at OR Tambo in Johannesburg, and in Maun by lunchtime. Seemingly endless, uninhabited desert and semi- desert  had been the view for much of the trip to Maun, then some glistening water, scrub and tress as we approached the airport.  Once through the hot tedium of customs/immigration at the small but busy airport, changes came rapidly.

Superlatives may just be word on a page until you’ve experienced them, but our experience with Wilderness  Safaris/Air was filled with them.  This is one very slick, professional outfit packaging exceptional adventures. We were greeted with smiles, scented cool facecloths, whisked ahead of queues and were soon winging our way, hopping from airstrip to airstrip en route to our first camp- the premier Vumbura Plains.

Water glistened, shimmered and shone under the hazy blue sky as we flew. The Okavango Delta- where the Okavango River dissipates into the Kalahari sands- is a phenomenon words can’t adequately describe. Each year approximately 11 cubic kilometres of water spreads over the 6000-15000 km² area. What I kept asking myself was “how does it flow?” since there is a less than 2 metre variation across the Delta. Nevertheless, flow it does. But, at first, words did not. Initial impressions of the Delta are thoughtful for most it seems- a time to simply take in its immensity. Words do eventually flow- unspoilt, pristine, primal for example. The water is 97% potable, filtered by the white sands. It appeared in a myriad aspects: glinting from between reed rafts and papyrus, festooned with lilies, fingering through grasses and over contrasting coloured bottoms of innumerable channels, marshes and lakes. The waters were punctuated with small islands, palm trees and many other (as yet) unknown plants, blobby grey elephant, swaying giraffe and other game.

Sadly almost, we made our last landing and were soon warmly welcomed at the gracious, designer delight that is Vumbura Plains. This is bush elegance of a high order. Attention to every detail- once your preferences are assiduously assessed you will find your preferred tipple as a nightcap in your suite, for example. And what suites! They are enormous canvas and shadecloth sided, thatched extravagances raised (for safety) above the ground – split level with a sunken lounge, plunge pool alongside lounger under a huge tree on the large, private deck with its covered, outdoor lounge.  The luxury and views made it tempting to do not much more than lounge- or arrange for a massage with elephants browsing metres away. 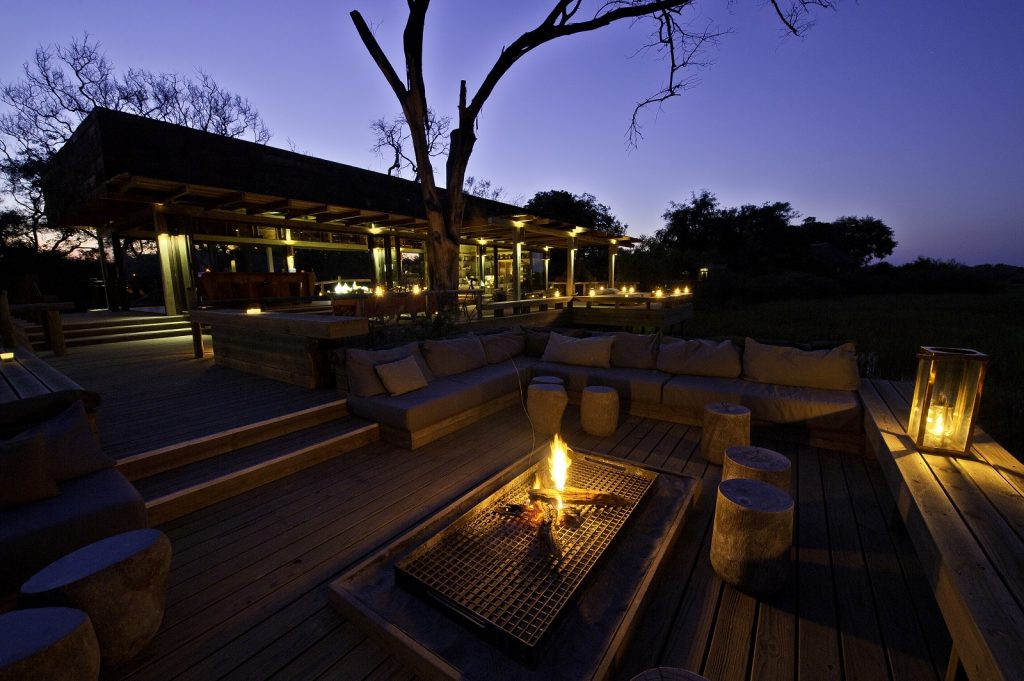 The star attraction- the Delta- awaited however and so, after dragging ourselves from the exceptional afternoon “tea” spread, we were whisked off by the charming Lazarus Maolosi for our first excursion. Ebony and Kalahari Appleleaf, Jackalberry and Rain trees, ubiquitous hornbills and plovers, starlings, bee- eaters and the gorgeous Lilac Breasted Roller.  I am not a twitcher (birder) or budding botanist but was fascinated by the make-up of our surrounds. We saw game in greater numbers, and at closer proximity, than I have ever seen. Wild dogs and hyena are generally elusive and retiring. Here they could have been mistaken for domestic pets.  Lechwe and Tsessebe are not to be seen back home. Elephant are- and buffalo too- but I’d not seen such numbers. As much as the game sightings were wonderful, the lessons on the ecology were especially rewarding. The symbiosis between species for example- with the hugely important role micro-termites and their massive mounds play particularly illuminating. 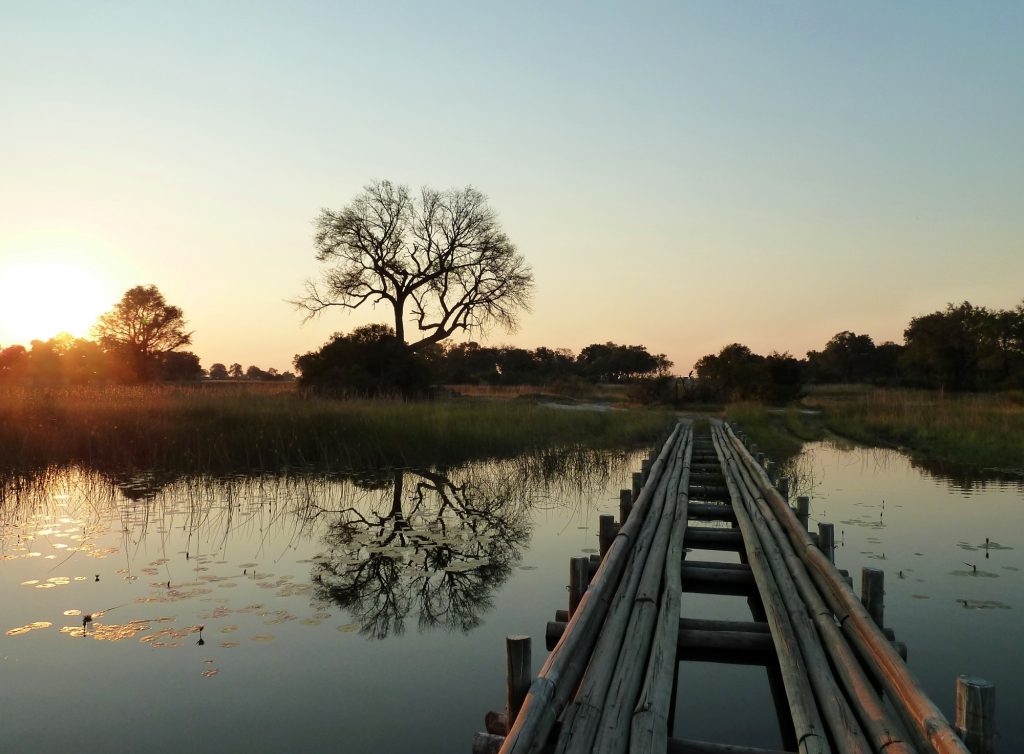 The water levels were rising and we spent time zipping through channels in a motorboat, as well as poling placidly in the fiberglass version (to save trees) of the traditional Mokoro dugout among bobbing lilies and spectacularly bright Angolan Reed Frogs. Two very different, but equally delightful, ways of enjoying the Delta waters. 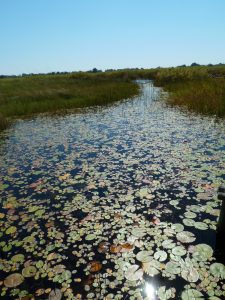 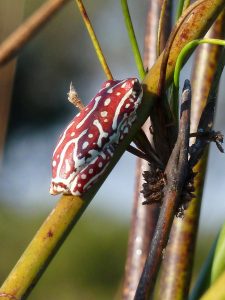 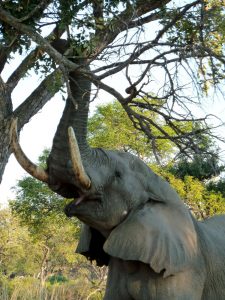 Back at camp we shared our delights with fellow guests and staff over leisurely feasts and fine wines.  Later, after an outdoor shower under the stars (or the fabulous open- plan indoor shower), we were lulled to sleep by those same frogs, tinkling like distant chimes against a backdrop of profound silence.

All too soon our Vumbura visit was over and we headed out of the Delta to Savuti Camp on the Savute (sic) Channel- a river system 35 minutes away by air. It’s different here in many respects- hotter, drier. Savuti makes the most of its perch above the extravagant sweeping bend of the Channel. It had a different feel – more “traditional Safari”- and is one of Wilderness Safaris’ Classic camps, with great food and a relaxed atmosphere. It’s perhaps “greener”, with a thermos flask instead of kettle in the room, no fridge, no private plunge pool.  “It’s bound to be even quieter” I thought, sipping Amarula and watching the firefly show, with frog accompaniment, before turning in after a hugely fun evening in the boma. Flopping catfish and munching hippo proved me wrong, but they had a good, metronomic rhythm going which worked just fine. 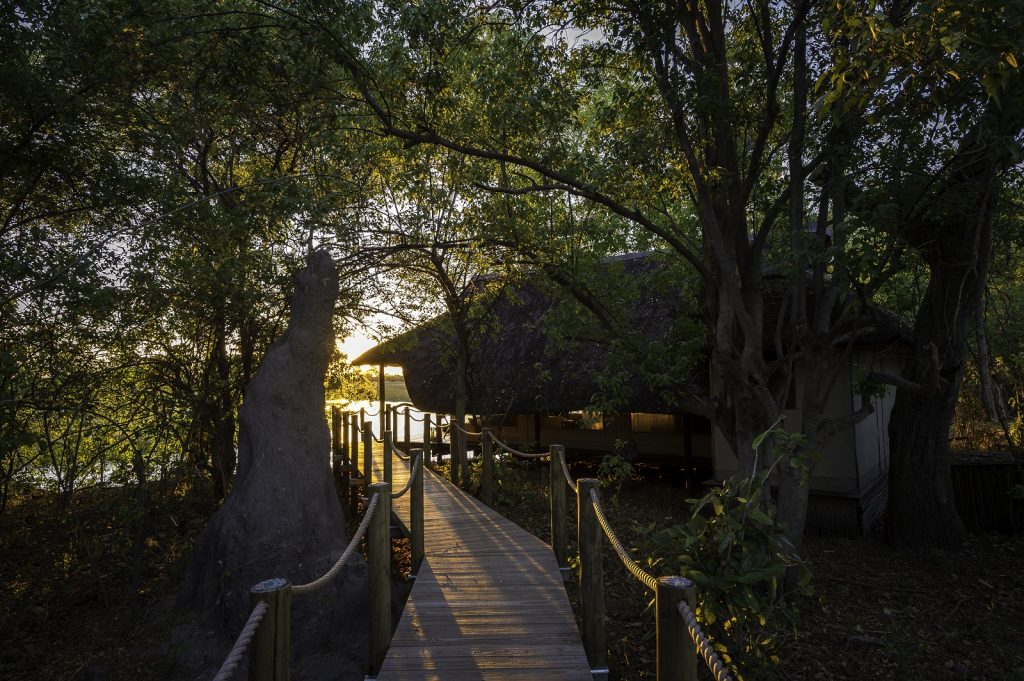 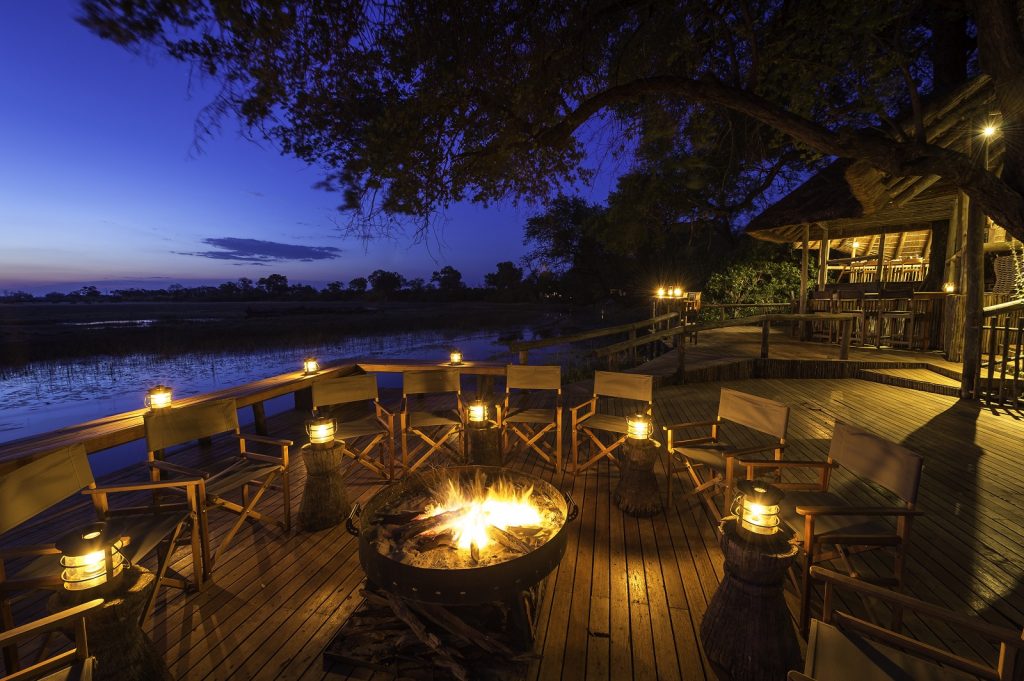 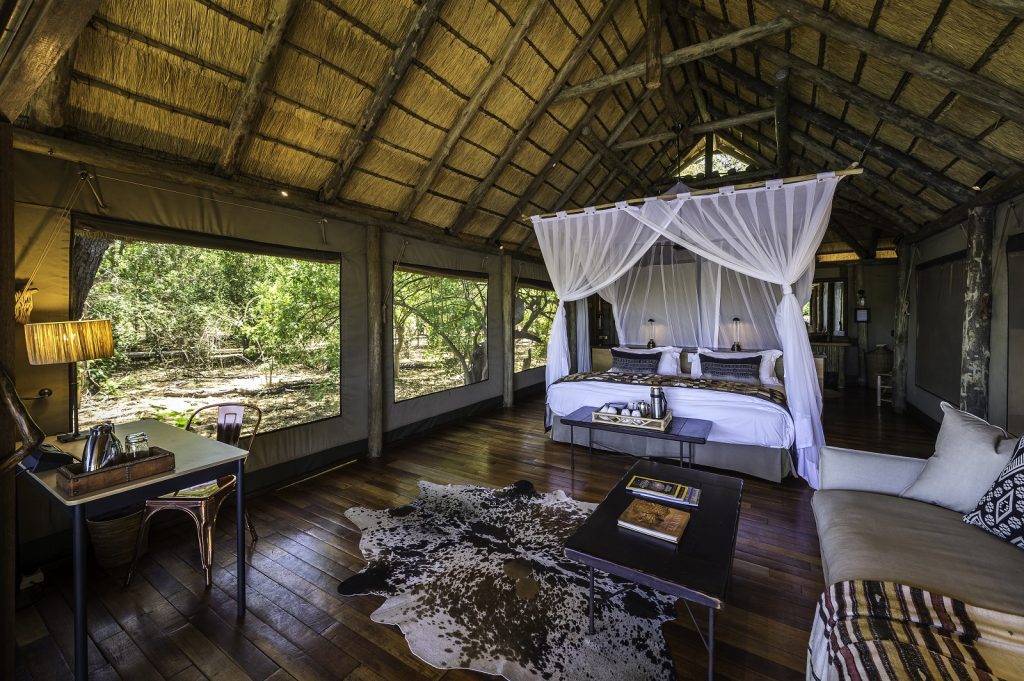 We were in the care of Goodman Ndlovu, the antithesis of Lazarus. Lazarus was quite the cowboy, Goodman the careful, precise “schoolmarm”. Whatever the character (both were charming), what made our Wilderness experience exceptional was the standard of guiding. I was deeply impressed by the guides’ knowledge and commitment.  I was beyond thrilled while at Savuti to have close, separate sightings within 26 hours of three leopards, to witness the display of the huge Kori Bustard, and chortled watching a massive troupe of baboons sharing a riverbank stage with charging young Impala. Quieter delights included Snowflake Grass- Christmas in Africa in the right light- and trees “decorated” with giant communal spider nests. 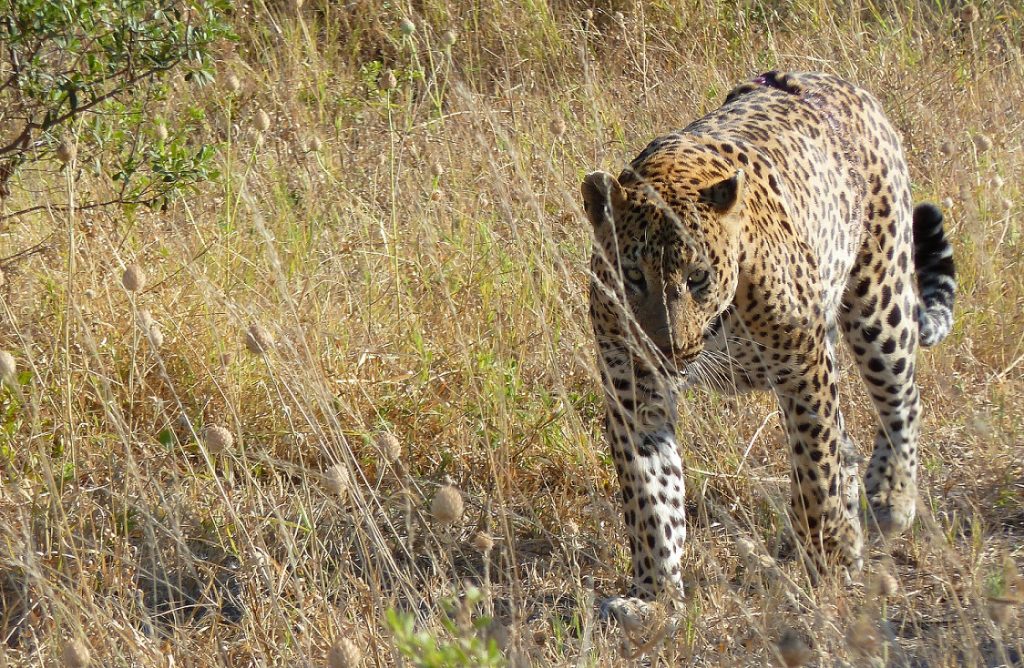 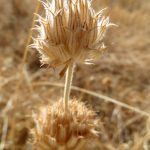 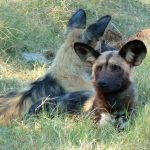 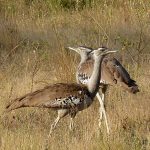 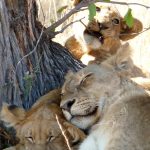 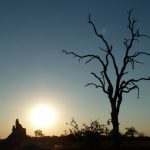 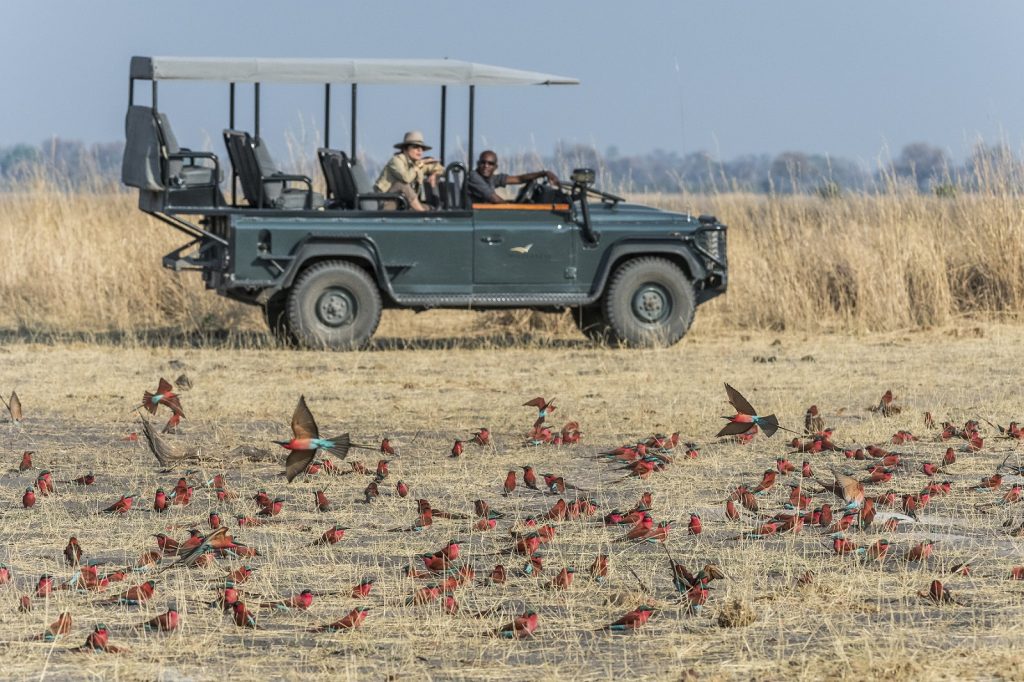 We learned a lot- in particular to reawaken and utilise our city numbed senses so as to understand and appreciate what the bush was teaching. This meant being still, attentive and so, in those and other ways I guess I did indeed discover some of what my friend cane here for. It wasn’t all Zen of course- like the time when, safely out of earshot (I hope) I whooped and punched the air, singing “Heaven, I’m in Heaven…”

You can understand why our fellow guests were abuzz about Wilderness Safaris’ African Residents Programme-  a loyalty programme which offers  whopping discounts. To find out more about member benefits visit www.wilderness-residents.co.za or e-mail  residents@wilderness.co.za. Visit www.wilderness-safaris.com.

Airlink connects you to Maun with direct flights from Cape Town and Johannesburg. Airlink, now connecting you to 37 destinations in nine African countries. Book your flight direct on www.flyairlink.com. Spread your wings- fly Airlink.