Q’s Review- The Royal in Riebeek

My Valentines evening was not romantic. No. Anything but. I’d been deep in consultation all day and was feeling emotionally drained, in spite of the days triumphs.

My client, the wry and dry Robert Brendel, proprietor of Riebeek Kasteel’s Royal Hotel where Q is working on an exciting new refurb is demanding, but with an unexpected sense of humour given the demands on his bank balance. The clock had barely chimed five when he ordered a bottle of smokey vanilla and citrusy butter and woody and marvellous Glenelly Estate Reserve Chardonnay. Just the way we both like it. (Oh Rob! We have so much in common.)

It was really only a matter of time before we were obliged to consider our stomachs and, although we were seated in the half painted fine dining restaurant to be and surrounded by stacked tables and freshly upholstered chairs, Rob called room service for a snack.

It was not to be.

The usual menu was suspended in favour of a celebratory four courser to celebrate that poor martyred Valentine patron saint of star crossed lovers.

Three hundred and ninety five bucks (ZAR). We missed out on the romantically dressed tables on The Royal’s fabled veranda, fresh with summer breezes up the valley and decorated with a faraway view of the dusk kissed Elandsberg mountains.

I would have been happy with a toasted cheese and tomato and really wasn’t expecting the sumptuous deliciousness that followed.

A heartful, blood red starter of beetroot prepared in six different ways. Ambitious, nothing I’d try at home. The kitchen had clearly been busy. A tantalising and piquant shot of borscht infused with a hint of vodka to set the pulses racing. A deeply fried chip of beetroot, crisp and fresh. Luxurious, silkily bright pink beetroot panna cotta. Complexly flavoured hummus infused with the lovely scarlet colour of this year’s favourite vegetable. Also pickled and flavoured in the Swartland tradition and also with, best of all, goat’s cheese.

But there was more! Another starter- and I could spend every meal eating starters don’t you know?

A tiger prawn wrapped in a rice pastry candyfloss. Another marinated in garlic, ginger and chilli and then seared on the grill and yet another, blanched and presented with a mango and chilli salsa with a cumin spiced mayonnaise. 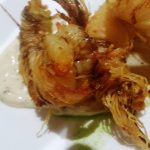 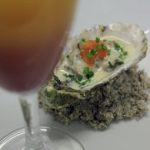 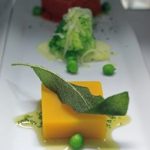 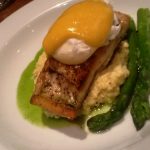 The room was already beginning to look romantic despite the half painted walls, draped dust sheets and stacked newly delivered furniture.

I hardly ever eat fish and, well, the wine and the music and, um, the moonlight was kicking in, so I dived in, continuing the marine theme begun with the trio of delicious prawns.

Banting too! Perfectly grilled kingklip, marvellously plated with cauliflower risotto and a poached egg drizzled with sauce Hollandaise and served with a bright green portion of wilted asparagus. I don’t remember eating a piece of fish this tasty or perfectly prepared and so artfully paired. Egg and Hollandaise. Yummy. 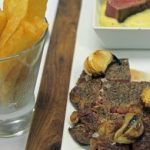 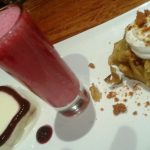 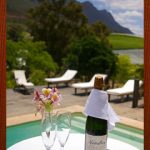 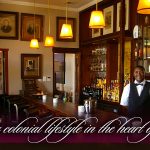 The kitchen pulled out all stops for the dessert. A complex ménage a trois of red velvet milkshake flavoured with everyone’s favourite- Amarula, Dutch apple tart with cream and a crumbled honeycomb and (it had to feature somewhere) a tiny lonely heart shaped panna cotta with a passionately blazing red berry coulis.

About the Author: Quentin du Plooy

Quentin is a well travelled, well rounded and well established interior designer, an artist and a foodie. Check out his website on www.qstudio.co.za