I know it’s still early days at Olive Bistro, but the discreetly air-conditioned room with its crisply white décor contrasts- most favourably- with the hot umber dusted streets and boho chic of Riebeek-Kasteel, the small Swartland town in the Western Cape hinterland where it finds itself.

I also know that Paul and Istelle Carlin are an ambitious pair. They’ve already moved on from Café Olive, the tiny coffee shop they took over five months ago. A 25 seater restaurant was never going to be big enough for a chef on a mission in a town known mostly for jolly eateries and rugged, but fine craft beer.

So clearly, the days of a prix fixe table d’hôte at Sunday lunch are limited. A more detailed and comprehensive à la carte menu is evolving as they settle into their new premises on the corner of Fontein and Plein Streets. The restaurant (it’s a bit too glamorous to be a proper Bistro) features as an anchor in a beautifully refurbished house which is located in a complex that contains an art gallery and offices. The broad and shady stoep with a views of the Kasteelberg Mountain serves gourmet breakfasts and lighter lunches during the week. 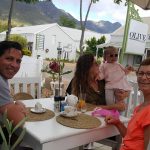 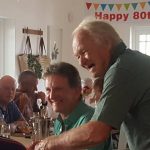 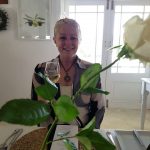 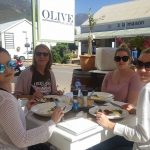 For two weeks in a row now Q’s lunched late and languidly on Sundays. The first after an opening at the RK Contemporary gallery next door.

I find the table d’hôte vibe to be stress relieving. Sit down, get chatting to your friends and eat wots put in front of you. Easy.

Particularly when the cooking is as careful and deliberate and detailed as Istelle’s and just so for the careful and measured service from Paul and his front of house team.

Amuse bouche: an agreeable little skewer of seasonal fruit and Chourico on one occasion and a complex hit of Gazpacho on the other.

Appetiser of Gorgonzola in phyllo with fresh seasonal figs and a compote of things fruity. More-ish, on my second visit. The first featured a smokey beetroot soup with potato croquette, don’t dare call it borscht, served just a small degree off room temperature. Proper! 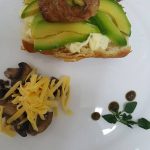 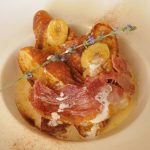 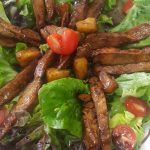 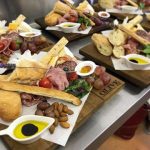 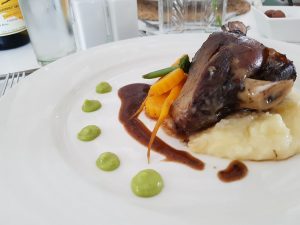 A choice of entrée. Chicken or lamb on one outing and chicken or beef, the other.

I’m a red meat eater so no surprise at my choice. Fall off the bone lamb shank with an authentic jus packed with flavour and complexity, served with delicately flavoured mash and carefully prepared vegetables. Cooked and crisp. The following week a rolled topside of beef that distracted from the conversation of my companions enough to assure me quality, but not nearly enough to bring me to detailed analysis.

We were all impressed by presentation and taste with the vegans more than adequately attended to, with a saffron rice pilaf dressed with a casserole-ish deliciousness featuring nuts and mushroom and tofu miso.

As dessert the vegans found berry dressed papino and the rest of us a chocolate and crème fraiche marvel also dressed with a berry compote and a crisp wafer thin biscuit and ice cream. 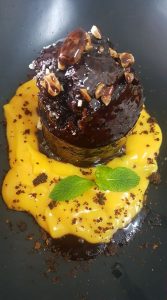 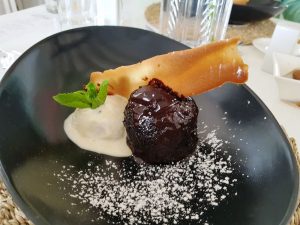 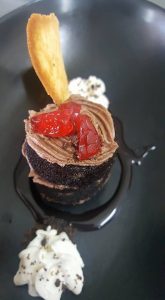 Some at the table found the experience fussy and formal and over priced.

I didn’t. I like detail and I like being waited on and besides what can you get for 250 bucks and bring your own wine and not get charged corkage?

About the Author: Quentin du Plooy

Quentin is a well travelled, well rounded and well established interior designer, an artist and a foodie. Check out his website on www.qstudio.co.za